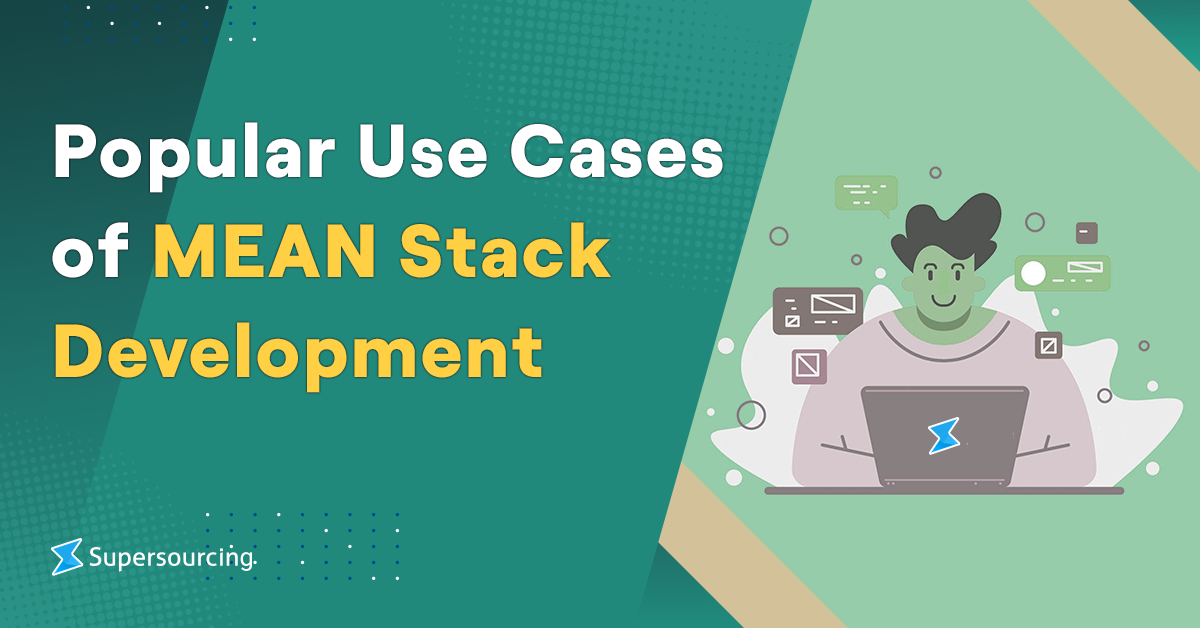 Applications like online calendars and maps can benefit from being built through MEAN stack technologies. MEAN stack is also useful when collecting data through a form. It’s particularly beneficial when the data is confined to one or two pages.

MEAN stack is also useful for complex real-time applications. The MEAN framework is more appropriate for social media applications because they receive multiple updates in the future. The JavaScript-based framework can lead to easier and faster update turnarounds.

Irrespective of the complexity of applications, delivering an MVP becomes crucial. The MVP enables developers to collect user feedback and improve their applications. It enables a smooth transition from one component to another.

The MEAN model is pretty beneficial for the DevOps lifecycle. IT staff and developers can keep applications secure, efficient, and functional. Delve into some popular use-cases of MEAN stack development and get practical examples of its benefits.

The world-famous streaming platform relies on the components of the MEAN framework. Originally, Java powers the the back end of Netflix and used JS for the front end. But managing two programming languages became difficult.

It opted for the universal JavaScript language to prevent developmental delays. As the OTT platform embraced one programming language for both front and backend, its performance and speed improved considerably.

While choosing between the MEAN stack and MERN stack, Netflix went with the first one because of Angular. It enables the streaming platform to create a plethora of animations. AngularJS allows Netflix to provide a dynamic user experience and increase revenue through paid customers.

NodeJS lets Netflix tackle large data loads and improve user experience. The MEAN components enable Netflix developers to make changes to the web application. The open-source nature of both AngularJS and ModeJS has made the process more efficient.

The MEAN stack application for smart money transfer uses both AngularJS and NodeJS for smooth functioning and easy transactions. AngularJS helps with the styling and handles the payment flow on the payment app. AngularJS also increases the safety of transactions with classes and unique HTML elements.

PayPal was originally developed using HTML, JavaScript, and CSS for the server and client-side. Now, they work with AngularJS and NodeJS for both front-end and back-end support. The MEAN stock components provide PayPal with outstanding development, user convenience, enhanced performance, and high speed.

NodeJS eliminates the need for multiple languages by enabling the browser and server application to be written using JavaScript. It unifies the engineering specialties of PayPal into one team. It enables the company to understand and react to users’ needs at different levels in the technology stack.

The application offers solutions for human resource management and primarily relies on heavy datasets. The application needs to handle critical employee information such as paychecks, health insurance, and more. MongoDB has enabled the creation of the Automatic Data Processing mobile solutions app.

The app is now available in 17 different countries. It caters to users speaking 23 different languages. The MEAN component has enabled the app to use innovative approaches for organizing large data sets.

Google has built the framework for AngularJS with the aim to offer fast and scalable web applications. Google also encourages developers to utilize the Angular framework for user interface development. Gmail was built using the AngularJS framework.

Gmail can load the browser for a single HTML and update the page. The MEAN stack framework makes it easier for users to read and compose emails. The features can be conveniently accessed on a single web page due to AngularJS.

Forbes is popular for building a CMS in 2 months and a mobile site in 1 month. They made it possible to use one part-time and one full-time developer. Even though the team was compact, the outcomes were major.

The MEAN model allowed JAVA developers to learn MongoDB’s structure. As a result, both time and cost could be reduced. Currently, Forbes allows more than 1000 bloggers to submit articles globally.

They use the CMS platform to publish content. The traffic on the website increased from 5% to 15% and reached 50% within a short span. Now, Forbes enables users to upload high-value articles within minutes using MongoDB.

Trello is a web-based platform for task and project management. It happens to be a Kanban-style project-listing app acting as an Atlassian subsidiary. NodeJS powers the server-side of the application.

With Node, the application of LinkedIn became 20 times faster. MEAN development has offered LinkedIn benefits beyond the technical aspects. JavaScript as a language is well-known to many, and developers feel comfortable coding in it.

The app for job search was originally built on the Ruby on Rails process-based system. As the company was dilating, it needed a dynamic approach for a scalable app. The MEAN component enabled the app to improve its performance.

The MEAN framework enables developers to leverage Java skills for running multiple scenarios. As front-end and back-end developers at LinkedIn merged, the usage of servers went down. Now, LinkedIn has more than 700 million users and at least 200 million active monthly users.

Angular enabled the YouTube developers to utilize dynamic codes to implement the user interface. It enabled videos to stream harmoniously on PS3. The MEAN model is sufficiently capable of maintaining both the quality and speed of YouTube videos.

MEAN stack development is giving rise to applications that are user-friendly and efficient. The rising demand for cloud-based services, especially after the pandemic, has made more developers choose MEAN stack and its innumerable benefits.