How to Hire Angular Developers Remotely: Top Questions to Ask 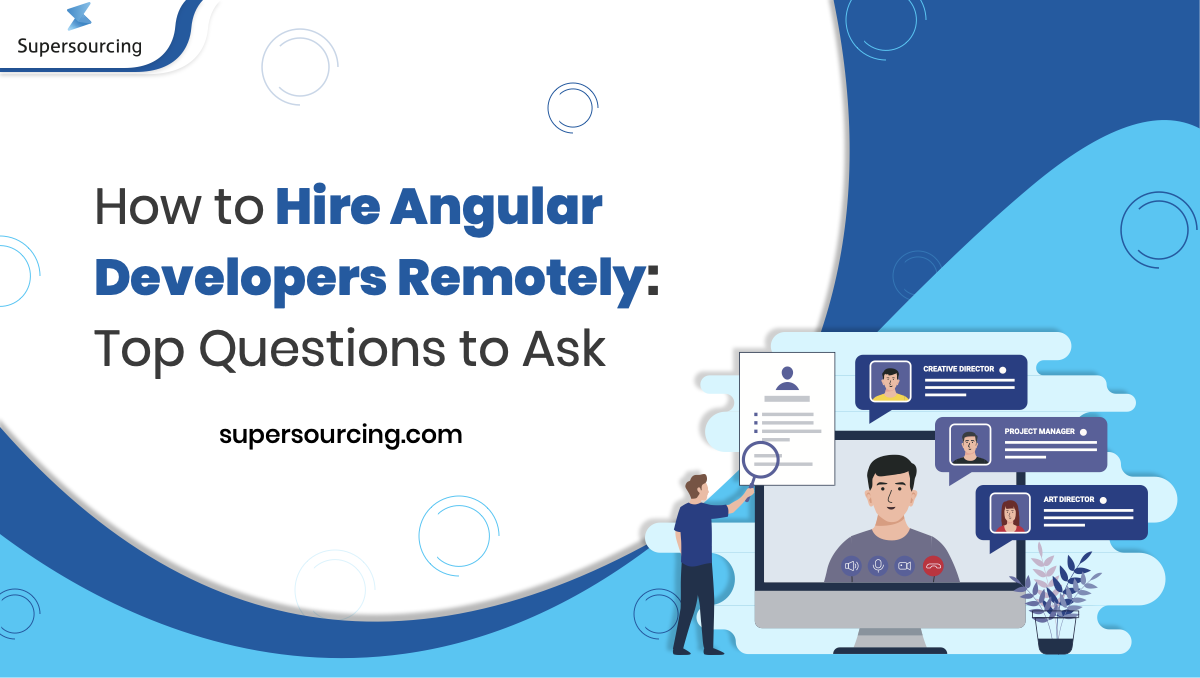 Mobile app development has become a major phenomenon throughout the globe. Nowadays, every business worth its salt is capitalizing on the trend to garner a global user base. That is why app development solutions like Angular are harboring astounding prevalence, so as to hire Angular developers remotely.

The Google product possesses a renowned stature, and businesses worldwide use it to build premium apps. Since Angular itself is surging in demand, businesses are hiring competent individuals to gain control over the situation. If you have ever indulged in the hiring process, you would know how troublesome it can be.

The process gets more intricate if you are hiring for a remote team. Now add the complication of hiring for a specialized technical skill like Angular, and the process appears to be unachievable.

While the process for hiring Angular developers remotely can be complex, asking the right questions can help you assess the candidate’s prowess in no time. You are probably paying a substantial angular developer salary. So it is important to make the right choice!

Q 1. What initiated the introduction of client-side frameworks like Angular?

Why ask the question: To comprehend whether the candidate knows the fundamental history of Angular. The ideal answer should be brief while explaining the motive behind the phenomenon adequately.

Answer: In the past, most web developers use jQuery and VanillaJS to develop websites. However, as websites became more prevalent, using the tech to maintain the sites became tedious. Apps with complex functionalities caused the developers severe issues, and jQuery failed to offer features to handle data across views.

This is what led to the advent of client-side frameworks such as Angular. They separate the process’s concerns while dividing the code into smaller pieces of data. This significantly simplified the development process of intricate web apps such as single-page apps.

Q 2. What is the primary intent behind using Angular in an app?

Why ask the question: To ensure the aspirant has a firm grasp of the subject. Thus, a well-prepared candidate will keep their answer concise and to the point.

Answer: Being a comprehensive frontend framework allows Angular to create reliable, modular, testable, and scalable website development. In addition to that,, it also plays the role of a web solution, providing esteemed assistance from development to deployment. Angular is also front-end developers’ first choice as it uses TypeScript, making it easy to scale and avoid minor errors.

Q 3. List some reasons why developers prefer Angular over other Frameworks.

Why ask the question: To see if the applicant is fully aware of Angular’s properties. The benefits can range in numbers, but an experienced candidate will mention the most prevalent ones.

Answer: Angular is preferred by many developers. Here are the reasons why:

Q 4. Mention the key differences between Angular and AngularJS.

Why ask the question: To see how well prepared the candidate is. Since it is a commonly asked question, the developer’s answer must be quick and precise.

Answer: There are numerous differences between Angular and AngularJS like:

Q 5. What are services when it comes to Angular?

Why ask the question: To ensure the aspirant is well-aware regarding the components of the tech. A prepared applicant should be able to articulate a short yet descriptive answer.

The motive behind Angular services is organizing and sharing business models, functions, and logic with different Angular app components. Additionally, the functionalities proffered by services can be invoked from any component like a directive or controller.

Q 6. What do you mean by MVVM Architecture?

Why ask the question: To assess the applicant’s grasp over primary Angular concepts. The ideal candidate must establish the correlation between the three pillars.

The model comprises an entity’s structure, meaning it possesses an object’s data. On the other hand, View can be termed as an app’s Visual Layer. It showcases the data contained within the Model, meaning it highlights the component’s HTML template.

When it comes to ViewModel, you can define it as an app’s Abstract Layer. It manages an application’s logic and Model data while displaying it in View. ViewModel and View are interconnected through data-binding, meaning ViewModel takes notes and modifies the apt data within the Model.

Q 7. What is the AOT (Ahead-Of-Time) compilation?

Why ask the question: To know whether the candidate knows the standard Angular terminologies. There should be no beating around the bush for the answer.

Answer: Every Angular app gets compiled internally with the help of the Angular compiler. It takes place within the TypeScript code, where it is compiled and used to produce JavaScript codes. The phenomenon happens only once per user and is called AOT (Ahead-Of-Time) compilation.

Q 8. What do you mean by Dependency Injection?

Why ask the question: Since Dependency Injection is a prevalent app design, it will give you intel on the candidate’s domain knowledge.

Answer: Dependency Injection is one of the most used app design patterns integrated by Angular, forming its core concepts. Dependencies mean services with functionality in the Angular circle.

Q 9. What code is used to create a decorator?

Why ask the question: To hire Angular Developers Remotely, it is important to evaluate the candidate’s technical skillset. Therefore, the ideal answer will be directly showing the code to the interviewer.

Hiring remotely and that too for a complex role as an Angular developer is demanding. The angular developer salary is also pretty high. Along with asking these questions you can also team up with Supersourcing to make your hiring process more streamlined.