What is MERN Stack? A Complete Guide 2022 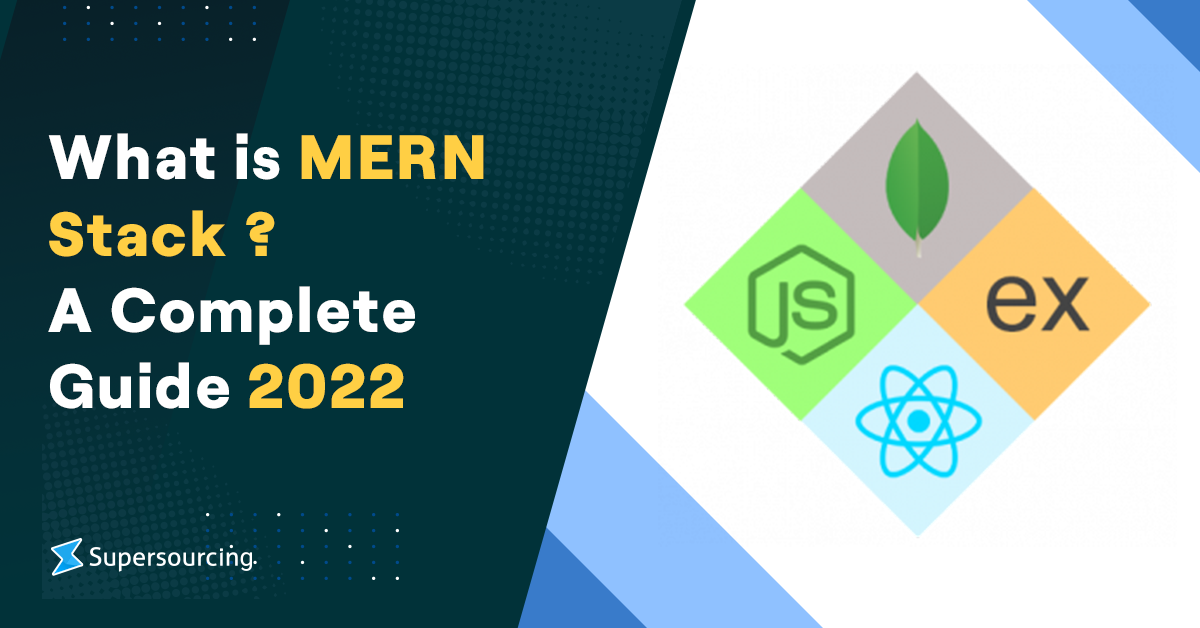 MERN Stack is a popular web development stack made up of MongoDB, Express.js, React.js, and Node.js. It has gained a lot of traction in the past few years because it allows developers to create full-stack web applications with relative ease. The development of websites has been largely simplified with the use of MERN Stack.

What began as a side project for full-stack web developer Clinton, administering data on the MongoDB database and working with the Express.js framework to route API calls, has turned into one of the most popular stacks used by developers today.

The MERN stack is a JavaScript stack that’s designed for the easy development of web applications. By using this technology stack, you can quickly create a well-organized project structure and build an application that is easy to maintain and scale.

As a full-stack developer, you will be responsible for developing and designing front-end web architecture, ensuring the responsiveness of applications, and working with teams to create user-friendly sites.

Keep reading as we learn more about MEAN stack technologies, including its framework, benefits, and use cases.

The full form of MERN is MongoDB, Express.js, React.js, and Node.js. It is a JavaScript stack used for the smooth development of web applications. MERN Stack is open-source and free to use as it contains a combination of four popular technologies namely MongoDB, ExpressJS, ReactJS, and NodeJS which comprise the mean stack application.

This also makes the MEAN Stack framework a cost-effective solution as developers don’t need to invest in learning different technologies for each phase of web development.

Let’s delve deeper into each of these technologies that make up the MERN stack.

MongoDB is a powerful and popular open-source database management system. It uses documents and collections instead of tables to store data.

It is also an agile NoSQL database that allows developers to iterate and change the structure of data quickly. MongoDB offers various scalability options that make it easy to scale applications as per the requirement.

When it comes to technicalities, MongoDB uses the BSON (Binary JSON) format to store documents. BSON is a binary-encoded serialization of JSON-like documents.

BSON extends the JSON model to provide additional data types, and ordered fields, and to be able to represent data structures more complex than what JSON can represent.

ExpressJS is a back-end web development framework that runs on Node.js. It is the most popular Node.js framework and is used by big companies like Accenture, Myntra, etc.

ExpressJS is also very lightweight as it doesn’t come with built-in features like form validation, templating, etc. But this can be easily overcome by using various third-party modules or libraries. Overall, ExpressJS is a great choice for back-end web development using MERN stack development.

ReactJS is a front-end web development framework that enables user interface development. It is a popular choice for developing single-page web applications as it offers high performance and scalability.

If you want to develop complete web applications using MERN stack web development, then you will need to use other technologies like Node.js, ExpressJS, MongoDB, etc.

NodeJS is a back-end runtime environment that runs on JavaScript, enabling development of server-side applications. It is a very lightweight and efficient as it uses an event-driven, non-blocking I/O model.

Now that we have seen how each technology in MERN stack development is useful, let’s see how these technologies work together to develop complete web applications.

The first step is to develop the backend application using NodeJS and ExpressJS. This involves developing various features like form validation, database integration, etc. into the NodeJS application. Once the back-end application is ready, developers can begin with the front-end development using ReactJS.

This involves developing various user interface components using ReactJS. Once both the back-end and front-end applications are ready, the developer can integrate both ends together to form a complete web application.

The various benefits of MERN stack development include scalability, performance, flexibility, etc. that make it a popular choice for developing modern web applications.

MERN stack web development is useful for developing a wide range of web applications. Some of the popular use cases of MERN stack development are:

It is flexible in a way that allows you to use various technologies as per your project requirements. Moreover, the large community of developers behind MERN stack development helps in keeping the technology up-to-date.