What is NodeJS? What Are its Uses? 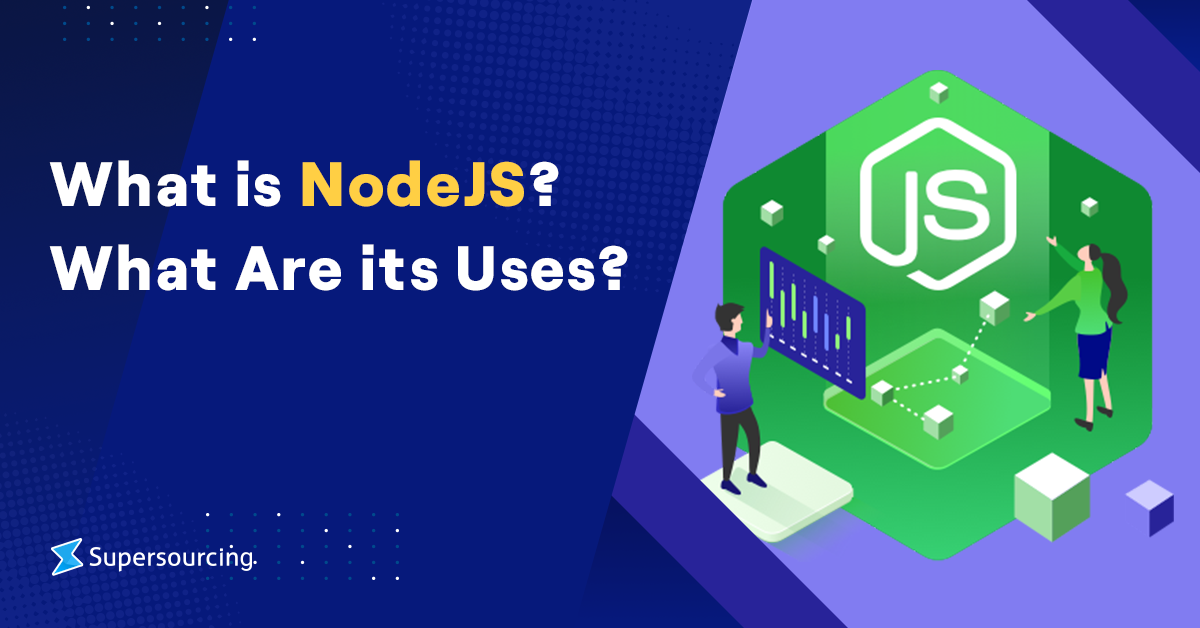 NodeJS is a platform built on Chrome’s JavaScript runtime for easily building fast, scalable network applications. NodeJS uses an event-driven, non-blocking I/O model that makes it lightweight and efficient, perfect for data-intensive real-time applications that run across distributed devices. That is, NodeJS can be used for a variety of purposes, including developing web applications, real-time communications, and server-side scripting. Some of its most common uses include creating chatbots, developing APIs, and creating single-page applications.

In this blog post, we will discuss everything about NodeJS. We’ll cover the most common application and uses of NodeJS, and how it can help improve your development process. So if you’re ready to learn more about this powerful technology, keep reading!

Ryan Dahl created NodeJS back in 2009 and since then, NodeJS has become one of the most popular JavaScript runtime environments available. According to recent surveys, millions of developers worldwide are using NodeJS, with over 50 million downloads.

One of the reasons why NodeJS is so popular is because it offers a number of benefits for developers. For example, NodeJS is:

These features make NodeJS an ideal platform for developing a variety of applications, including web apps, chatbots, server-side scripting, and more.

In addition to being popular among developers, businesses also favor NodeJS because it can help improve their bottom line. For instance, NodeJS can be used to:

What is NodeJS Written in?

NodeJS is written in C, C++, and JavaScript.

The reason why NodeJS was originally written in C++ was that Dahl wanted to create a platform that could be used to build lightweight applications with high performance. However, he later decided to switch to JavaScript because it is a more widely-used language, and it would make NodeJS more accessible to developers.

Despite being written in different languages, both C++ and JavaScript have similar features that make them well-suited for developing NodeJS applications. For instance, both languages are:

NodeJS applications are typically written in JavaScript, although you can also use other languages, such as TypeScript, CoffeeScript, and Dart.

These languages all have their own benefits and drawbacks, so it’s important to choose the one that’s right for your project.

In general, JavaScript is the best choice for developing NodeJS applications because NodeJS supports this language primarily. However, if you’re not familiar with JavaScript or if you’re looking for a more structured language, then you may want to consider one of the other options.

NodeJS can has multiple uses and applications. Let’s take a closer look at each of these NodeJS use cases.

One of the most common uses for NodeJS is developing REST API-based applications. These types of applications typically use NodeJS as a back-end server and a database, such as MongoDB, to store data. It uses packages like Express.js and Koa.js to handle requests and responses.

SPA or a Single Page Application is a web app that loads a single HTML page and then updates the page in response to user interactions. NodeJS can also help develop complex SPAs by using frameworks like Angular, React, and Vue.

NodeJS is also helping develop chatbots. Chatbots are computer programs that simulate human conversation, and often provide customer support or perform other tasks. NodeJS is a good choice for developing chatbots because it offers features like real-time messaging and event handling. In addition, there are a number of NLP libraries, such as natural and wit, that can help develop chatbots with NodeJS.

Another common use case for NodeJS is server-side scripting. This is where NodeJS helps to generate dynamic content before the client (browser) receives the same. For example, when a user requests a web page, the server will use NodeJS to query the database and then generate the HTML code for the page before sending it back to the user.

Data streaming is another popular use case for NodeJS. This is where data transfer is happening in real-time, such as when a user is watching a live video or listening to a live audio stream. NodeJS offers a number of built-in modules that make it easy to handle data streaming.

Developers are also using NodeJS to develop Internet of Things applications. These are applications that connect devices to the internet and allow them to communicate with each other. NodeJS’s event-based nature makes it a good choice for developing these types of applications.

As you can see, there are a number of different NodeJS use cases. It’s a versatile platform that can be used for a wide range of purposes. If you’re looking to develop a web application, then NodeJS is definitely worth considering.

Popular Applications that use NodeJS

Now that we understand some of the different ways to use NodeJS, let’s take a look at some popular applications that use NodeJS.

As you can see, NodeJS is a versatile platform that can be used for a wide range of purposes. There are a number of popular applications that use NodeJS, and it’s only going to become more popular in the future. In addition, there are many modules and libraries available that make development with NodeJS easier. So if you’re looking to get ahead of the curve, then learning NodeJS is a good idea. There are many certifications and courses available that can help you get started.