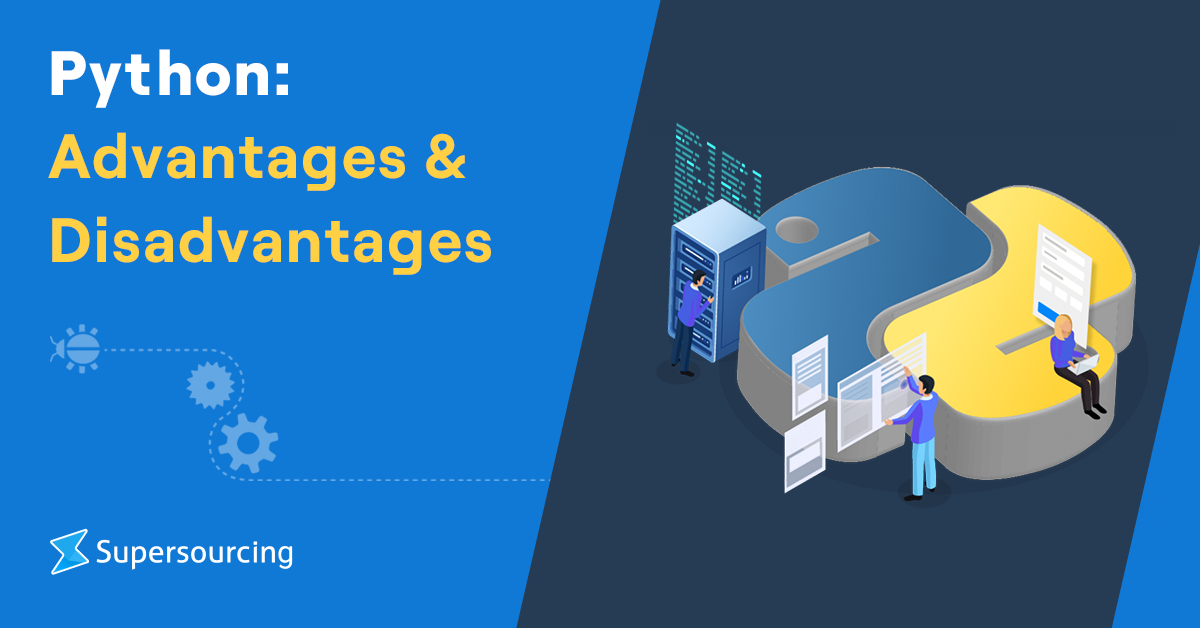 Python is one of the most renowned and mention-worthy programming languages in today’s tech-world. It is one of the fastest growing programming languages globally. It can solve multiple tasks and is compatible with all types of OS, ranging from Ubuntu to iOS. Though it is quite an easy language to learn, due to which a lot of beginners like to prefer Python over other languages. Therefore, it is important to analyze the advantages and disadvantages of Python before learning it.

The first and foremost advantage of Python is that; it is an incredible first programming language for every future developer. It’s simpler for a beginner to get a handle on command in Python. It is an undeniable high-level programming language nearer to the dialects we speak. The cherry on the cake is that what one wants to learn to gain Python programming skills, all are accessible online free of charge.

The undeniable fact and the most familiar advantage of Python language are- it has amazingly simpler syntax as compared to other programming languages. With less punctuation and symbols in Python, the codes are very short and more clear. It is a human-understandable language, even for the people who are amateurs in the development world. Simple syntax structure additionally makes the language simple to learn.

While comparing Python with Java, it turns out that Python is a more powerful language. Conversely, with static Java, the developers don’t need to define the type while array declaration and can store any data they desire.

Another vital benefit of the Python programming language is that it is an interpreted language, which implies that the code is executed line by line. Hence, in case of any error, the interpreter stops the program’s execution and reports the error instantly with line number and type of error description.

Regardless of whether the program has multiple errors, the Python interpreter will only show the one that arises first. Therefore, it facilitates easy debugging.

The standard library of Python programming language is quite huge, and it holds all of the functions that one expects for their work. As a result, one doesn’t have to rely upon 3rd party libraries.

Regardless of whether you try to, a Python Package Manager (pip) makes importing extra magnificent packages from the Python Package Index a lot more straightforward (PyPi). There are around 200,000 packages on the whole.

Some of the most popular libraries of Python are:

One of the top advantages of using Python is its asynchronous development which can be more troublesome than linear programming, yet it further enhances application performance and responsiveness. Asynchronous implies parallel programming under which multiple assignments can be handled at the same time.

Python multiprocessing permits CPU-bound task solutions. Assuming there is a need to process a system to execute multiple things at a given time, then the Python programming language can deal with that impeccably. Suppose the application requires to connect with 6 databases and perform network changes. Multiprocessing will assist each task to run on its CPU and simultaneously lessen the execution time which makes it quite effective.

The Python language is used across a wide range of platforms such as web, mobile application, front-end, and back-end development. It happens to use in both functional and object-oriented programming.

Its multipurpose versatility isn’t confined to software development only. It is an extraordinary scripting language for Python developers who are only required to utilise script to tackle explicit problems rather than completely developing software.

It is also a very famous language in Data Science and AI. This is a result of its powerful and mature libraries which permits developers to manage data to deliver quick results.

Another advantage of using Python, additionally an extraordinary one, is that it can work with libraries like Cython and Jython as well as other programming languages like C, C++, and Java for cross-platform app development. There is no comprehensive programming language like Python that can be used for all applications and tech advancements.

Sometimes strengths can be turned into shortcomings, the same is the case with Python where one of its advantages is turning out to be its major drawback. Also, this claim is well demonstrated with the speed of Python. The explanation that Python has a low speed is on the grounds that it is a dynamically typed, and interpreted language. It implies that the codes are executed line by line.

Additionally, Python’s drowsy speed is basically because of its dynamic nature. It requires some additional work all through the execution process. Low speed is one of the reasons why Python isn’t used when performance is the basic criterion in an application

Another drawback of  Python is memory consumption. It is a programming language that consumes a great amount of memory and such issues usually emerge when there are a lot of objects active in RAM. In big projects, the Python developers have to manage memory leaks and memory usage problems. Nonetheless, whenever managed intelligently everything can be fixed by reducing object size and diagnosing memory leaks.

Loose security is another Python drawback. It isn’t 100% secure. Thus, to deal with such a situation, the Python developers need to take all the preventive measures whatever is required to guarantee the code’s security. Nonetheless, by carrying out the right QA testing, the security issue can be eliminated and doesn’t require to be stressed over this.

Python users face a number of issues with the language’s design. As Python is a powerful and dynamically typed language, the data type of a variable can be changed whenever required. Subsequently, it ought to be tested more regularly, and there are problems in the language that are uncovered during runtime.

At Supersourcing, we trust this blog about the advantages and disadvantages of Python is truly useful for you to easily take advantage of it to foster your business. Meanwhile, if you face any issues or require assistance to develop your project, reach out to us without any further delay. Supersourcing is one of the top IT outsourcing platforms. We are expert professionals in the field of eCommerce, Web and Mobile applications, CMS site development, and many more.