Why Most Social Media Apps Fail? 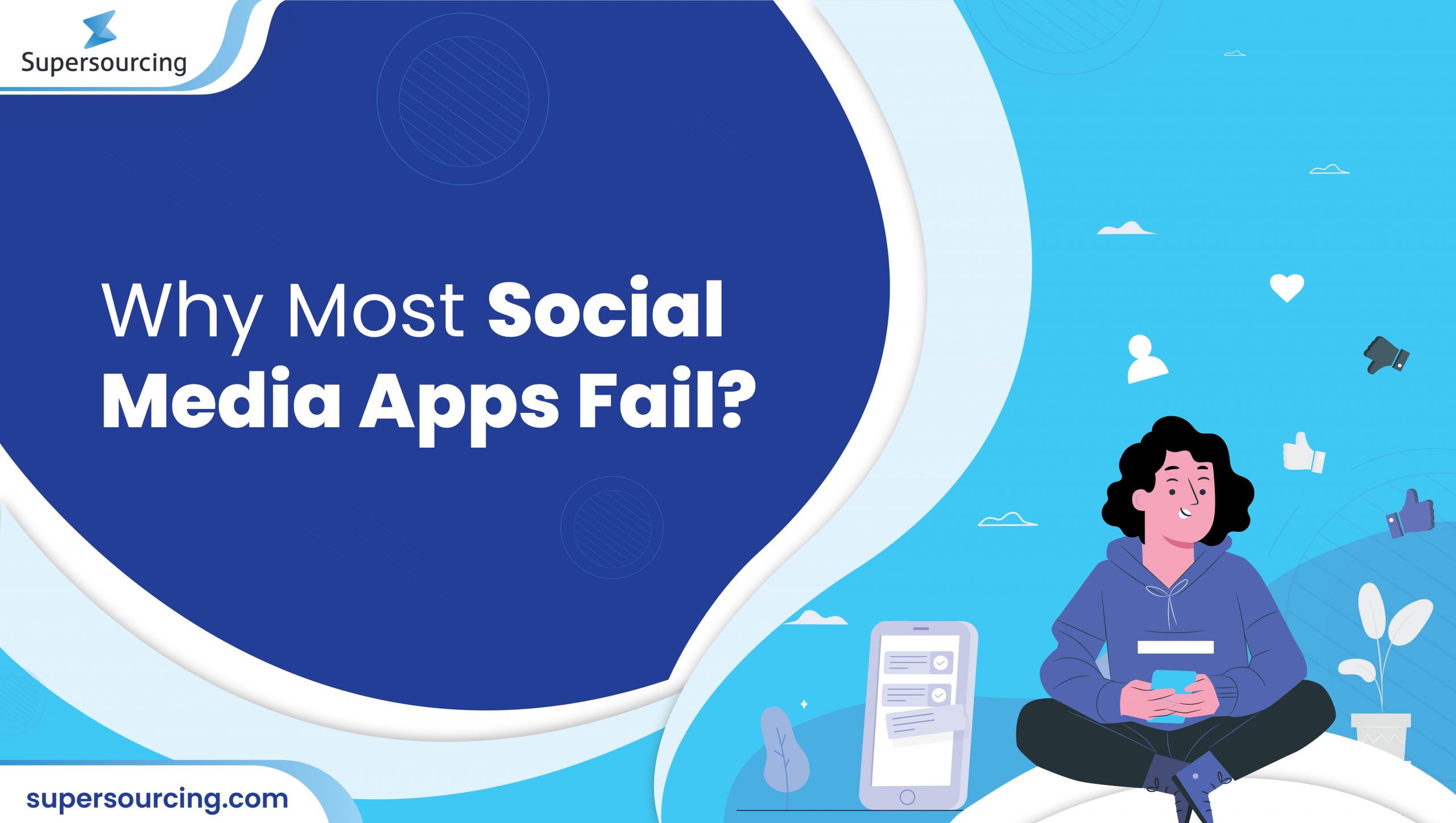 Why most social media apps fail is something that most developers and organizations do not understand. However, what you need to know is why your app did not work in the market. The Google Play Store and Apple App Store are flooded with apps that provide the same functions as yours. The competition is too high, therefore if you lack one thing in the development of your app, it will be a failed social media app.

Surprisingly, 80-90% of most social media app users abandon the apps after a single-use. The researchers also say that most social media apps lose their Daily Active Users within 3 days of installation because they don’t seem original. Gartner’s study reveals that in 2018, there was just one successful app out of 10,000 apps launched at the same time. This is a factor that puts most of the industries in worry.

Now, here are some factors that you can work on to avoid the failure of your social media app-

There is a lack of originality because some developers copy from other famous apps, which is why most social media apps fail terribly. You cannot copy someone else’s hard work and get success with that. A user will browse through thousands of apps before downloading something they trust.

An app asking for too much personal information before you can access it can also be a reason for failure because an old age group of people might not feel that it is relevant for you to ask too many details. In contrast, a group of the younger generation might not feel the same.

Research of the competitive market is for your benefit. It will help you reveal your competition’s strengths and weaknesses, and you will be able to strategize a blueprint of your app and implement it.

The best way to get through a user’s mind is to know what they want in an app and be unsatisfied with the one they are using. Make sure that your app is easy to access and safe to use amongst people of all ages. Be very focused on your target audience as it will make a huge impact on your work.

2. Research Your Competition and the Market

Most social media apps fail because they don’t do their research work. It’s easy to think that the users will love your app but is there any way that validates your assumption? Before making a blueprint for your app, you should look at your product’s target audience. Knowing your target audience is necessary for developing your app that focuses on a user’s needs. Still, it also helps you campaign your product easily to attract customers.

The most important way to achieve success online is by going entirely online. There are not only one or two, but millions of ways to promote your product online and win. Web developers should also be good with their methods to promote. One of the most used and best strategies is, to make a video of your product and then stream it online through channels, social media, or some other platform that you know and trust. Also, you need to make sure that your video’s content is directly hitting the target group so that you get leads and a significant amount of crowd on your app.

Also, other ways to promote your app is to start a blog about your product or use every social media platform, such as LinkedIn, Pinterest, Instagram, Facebook, YouTube, Twitter, and many others. It will let your target audience know about the launching of your app and what it offers. It will minimize the chances and avoid the reasons why most social media apps fail.

4. Lack of Funds and Project Delays

Your social media app can be successful in the first 6 months of the launch, but how do you keep this running without facing any issues? A common issue faced by app developers or an organization is the problem of funding. Sometimes, lack of funds and resources becomes a major issue, and they have to shut down their good going businesses. It is one of the major responsible reasons for why most social media apps fail. To avoid this, you just need to make sure that you have enough funds and resources to keep you going till the date you start earning some money.

Delays are one of the most prominent reasons why a social media app fails; this is a challenge faced by most companies trying to get their product shipped out. Delays can happen for many reasons, but usually, they are a result of poor processes, improper capacity planning, dependencies, and talent gaps. An organization running out of money is also a reason for the delay in the product launch.

Your social media app should be user-friendly, or it is on the verge of going down. These are some of the areas that an app developer can work on-

Your app should not take more than 20-22 seconds to load the landing page, or you just lost a user. A user will always desire to use an app that takes less time to load and show content immediately.

The UI requires you to have a simple app design, HIGH and useful performance levels, and an app that follows the General Data Protection Regulations (GDPR) standards.

With the number of mobile app users globally, a user will always go with the compatible ones. So, as an app developer, you need to make sure that you test your app on different platforms to verify aspects such as bugs and compatibility issues that the user can face.

App developers can make good money on their platforms by using the “pay to access” key, where the user will pay you an amount to enjoy the features you provide.

Online surveys have shown that apps highly benefit from Mobile Commerce (i.e., m-commerce). This refers to the transactions that take place through your mobile apps that you do to purchase the items sold here.

An outstanding amount of people still use email to communicate with people around them. It is a successful way to market your app and tell the users what’s new and different from other apps that you are offering.

Several factors play a significant role in the successful launch of an application from your research, execution, marketing, targeting audience, and many more. Be careful while launching your app at every step if you want to make an impression on your user. Focus on your app’s audience and make the best efforts to market your product and give your app quality testing to avoid it from being a failure.

Get recommendations for your projects here at https://supersourcing.com/

You can log on to supersourcing.com and get great ideas, quotations for your project. Also, you can discuss your project online without going anywhere and close if you like the plan they are offering for your work.

Sign up for your software development needs here Supersourcing.

And for businesses, you can sign up for free online, showcase what you are doing and how you are doing it, get matched with projects that fit your skillset, discuss the projects, and close. You can very quickly grow your business here on Supersourcing.